Epcot’s International Food & Wine Festival is hands down one of my favorite times to visit Walt Disney World. It’s such a fun time to try different dishes that you might not otherwise experience. The 2016 festival began September 14th and runs until November 14th. I’m going to share some tips with you and then share some pictures and information about the dishes we tried. If you’re heading down to the festival or have thought about visiting during that time, you definitely want to read on!

So are you ready to see some of the food? Be prepared to get hungry!

Belgium was a favorite of mine from previous festivals, and this year was delicious as well. We split all three of their food offerings: Beer Braised Beef with Smoked Gouda Mashed Potatoes, Belgium Waffle with Chocolate Ganache and Whipped Cream, Belgian Waffle with Berry Compote and Whipped Cream. I know the beef looks kind of gross, but trust me; it’s excellent. We really enjoyed the waffles too. This booth is a must try.

The “Le Cellier” Wild Mushroom Beef Filet Mignon with Truffle Butter Sauce is a festival favorite. I’ve skipped it prior years because I’ve heard mixed reviews. We decided to try it this time, and it was disappointing. I prefer my steaks medium, and this was well done. The sauce was nice, and I think this has the potential to be a winner if cooked properly. I wonder if they could be more consistent by cooking larger steaks and cutting them afterwards.

We stopped at The Chew Collective to try the Ricotta and Zucchini Ravioli with Rustic Tomato Sauce and the Peanut Butter and White Chocolate Mousse with a Caramel Drizzle. I’m going to be honest; I’m not a big zucchini fan. So why did I try this dish? Well, that’s one nice thing about the festival- you can try new things without committing to an entire entree. I knew I’d love the dessert, and I was right! We also sampled the Festival Chardonnay which was nothing special, but was very drinkable.

Chocolate Studio was a new booth this year. When I saw the Liquid Nitro Chocolate-Almond Truffle with Warm Whiskey Caramel, I knew I had to try it! It did not disappoint either! While it’s not a huge portion, it’s shareable because it’s very rich.

The Craft Beer booth is actually located in the Odyssey Center. That’s right; it has air conditioning! We enjoyed the Piggy Wings and Two Henrys Blueberry Vanilla American Wheat Ale. Piggy Wings are actually deep fried ribs and are pretty safe for those who aren’t adventurous eaters, and the Blueberry Ale wasn’t as heavy as most craft beers. I recommend both. 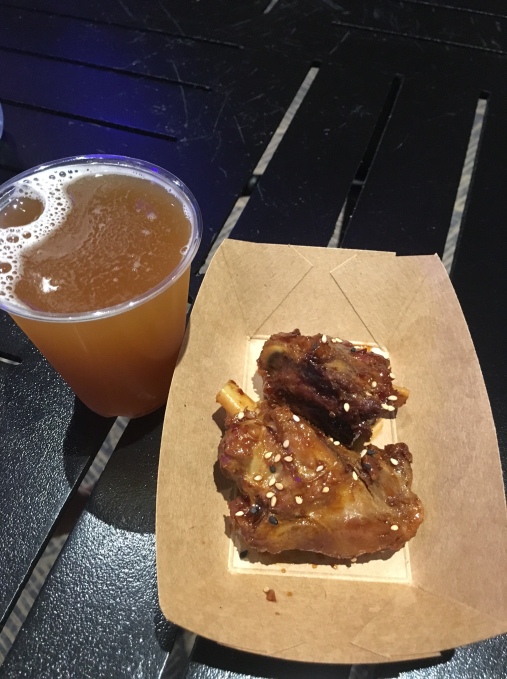 This booth sell just that- desserts in the form of ice cream floats and champagne. We sampled the Veuve Clicquot Ponsardin “Yellow Label” Brut. That’s a mouth full, right? Cheers! 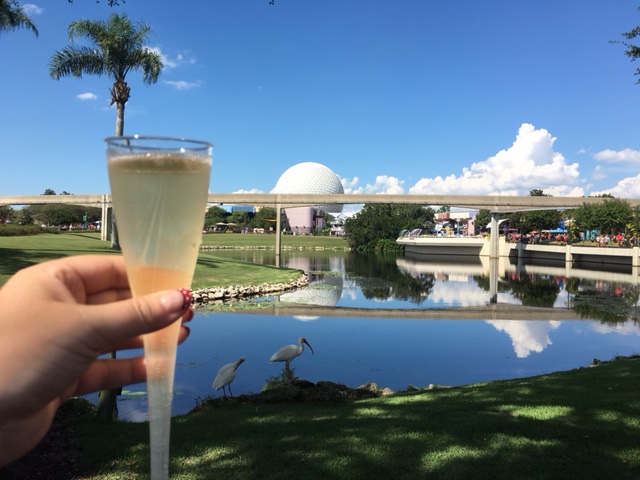 The Farm Fresh booth is located in the Showcase Plaza towards on the Mexico side. I had to try the Loaded Mac and Cheese with bacon, cheddar cheese, peppers, and green onions. It was very good and easily shared. I washed that down with a Woodchuck Raspberry Hard Cider which was refreshing. 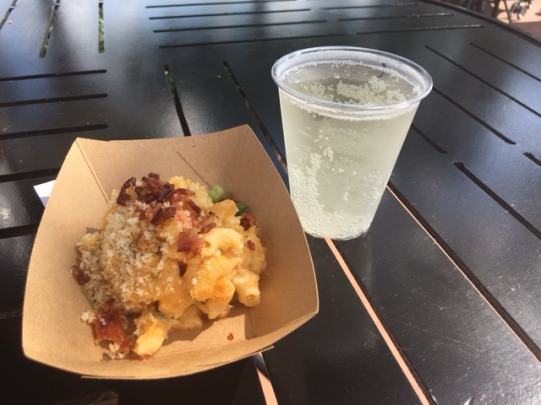 France had several things I wanted to try, but I just couldn’t manage soup in the Florida heat. Instead we ordered the Boeuf Bourguignon: Cabernet Sauvignon-braised Short Rib with Mashed Potatoes. It was pretty good but I prefer the entree in Belgium. 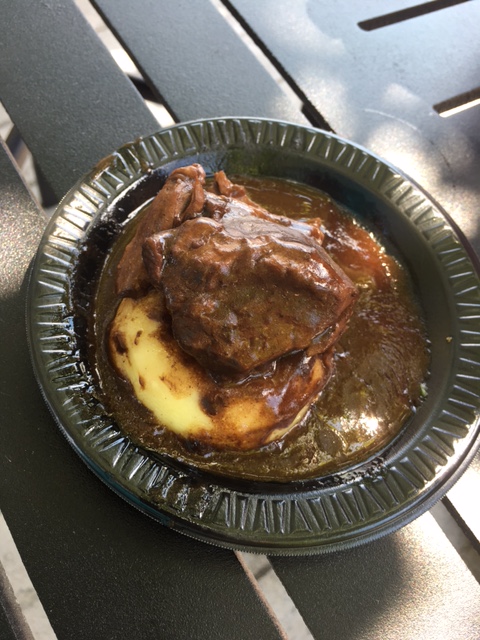 I also tried the Frozen Daiquiri Ice Pop; I just had to! I’m not sure if there’s anything French about it. While the flavor was good, it was quite messy, more so than a similar pop I’d had during a previous year. 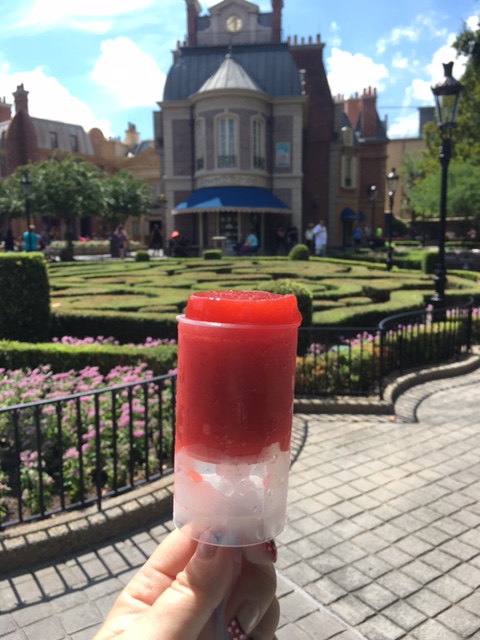 We tried the Garlic Shrimp: Marinated Shrimp Sauteed with Garlic Butter and Served over Rice. It wasn’t a complex dish, but the flavor was good. I’d probably pass on it next time for something more interesting, but if you like shrimp and garlic, you’ll enjoy this.

The two entrees we tried at the Patagonia booth were ones that I had a prior year, so I was glad to see them return. Pictured on top is the Roasted Salmon with Quinoa Salad and Arugula Chimichurri. Below that is the Grilled Beef Skewer with Chimichurri Sauce and Boniato Puree. I like the fresh flavor of the chimichurri sauce on both.

This was a booth that we visited multiple times. I was sad that the scallop formerly served at the Scotland both was not returning, but the new Wine & Dine Studio booth offered aa new scallop dish- Seared Scallop with Truffled Celery Root Puree, Brussels Sprouts, and Wild Mushrooms. It was good, but I still miss the scallop from Scotland. 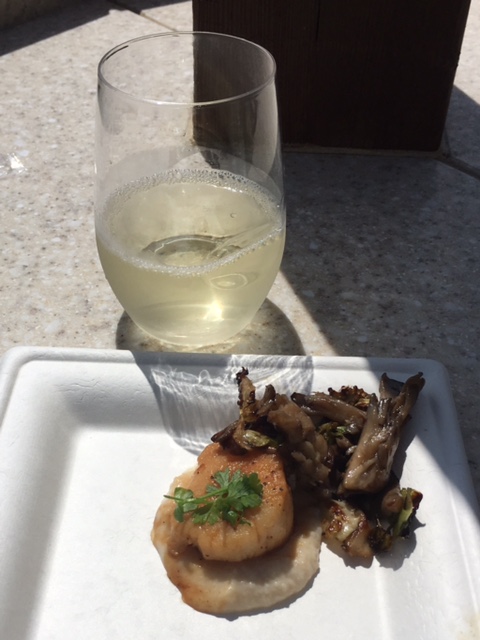 We also tried the Pork Tenderloin with Cannellini Bean Ragout and Zindandel Reduction. It was excellent and very tender. 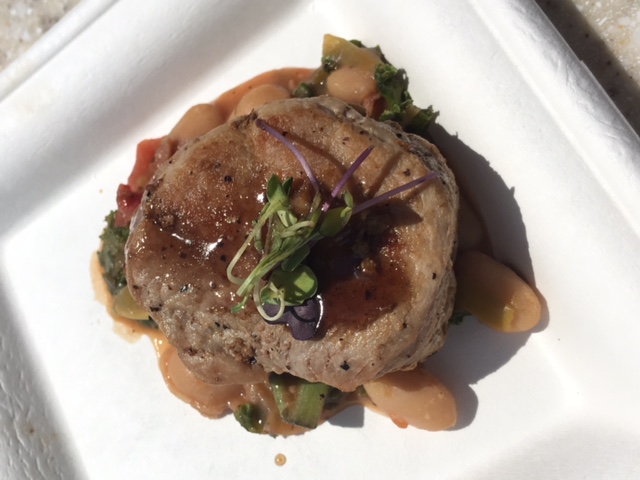 Overall, we were pleased by the quality of our food at the festival. Sampling new flavors and beverages is always a good time. The last day of the festival is November 14th, so there’s still time to get to Epcot and experience it yourself, and it’s not too early to start planning for 2017!

Did you visit the 2016 Epcot International Food and Wine Festival? If so, I’d love to hear about your favorites!

View all posts by Kelly